Every journalist knows the sight of a newsroom full of flustered and bedraggled reporters cursing every tick of the second hand as the clock pushes on mercilessly towards a deadline.

Every news editor and sub knows that many of those reporters have only themselves to blame.

Reporters have wasted countless hours of valuable newsroom time typing out needlessly complex sentences, empty cliches and other alphabetic fodder. Countless more has been spent expunging the same before the stories can be published.

I have to admit I was a little worried this morning when my car started to emit a shrill and urgent noise as it approached Chatham.

It turned out to be the radio, struggling to reach the whistle-tone frequency of Mishal Hussain's interview with deputy PM Nick Clegg on Radio 4's Today  (available on iPlayer, if you missed it).

Her determination to ensure Mr Clegg would not get a word in made me think about the interviewing advice Ron and I gave to our new recruits last week.

The mouth-watering fixture list for our inaugural Shorthand Champions League has been confirmed.

And you will be able to keep track of it with our FREE CfJSCL wallchart (be honest, it wouldn't be a real sporting event without one). 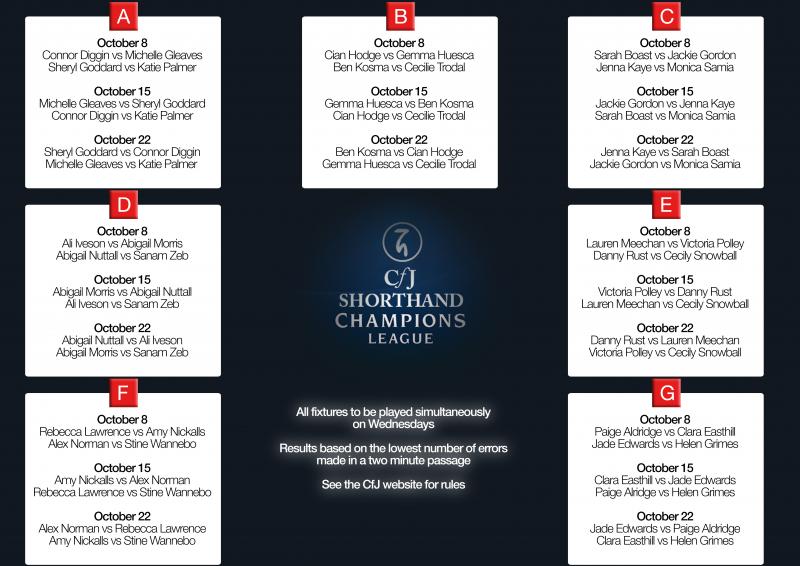 With fitting pomp and ceremony, the draw for the first round of the Shorthand Champions League took place today in the Centre's TV studio.

The competition will get under way for second and third years next week, with fixtures being played during Wednesday shorthand classes.

The draw - conducted by Ian Reeves and Rob Bailey, and overseen by Laura Garcia - threw up some tantalising clashes.

It's a historic moment, accompanied by a large helping of controversy. Some victims of media harassment claim it should not exist at all, and some newspapers (including The Guardian) have refused to sign up - so far - over concerns that it will not be robust and independent enough to fulfil the criteria set out by Lord Justice Leveson. Meanwhile, there are interviews with the new head of IPSO, Sir Alan Moses, doing the rounds in other newspapers in which he vows to win over his critics (paywall). Yes, those interviews appear in papers that have signed up to the new regulator. Don't expect this posturing to end any time soon.